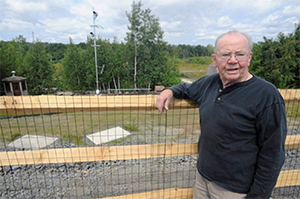 ASHLEY — A trackside railroad signal that once guided Central Railroad of New Jersey trains into and out of Ashley has been erected at the Anthracite Miners’ Memorial Park.

The restored signal will be available for inspection when the new state historical marker commemorating the Huber Breaker is dedicated on Monday, Sept. 4, at 11 a.m. State Sen. John Yudichak, D-14, Plymouth Twp., will be main speaker.

CNJ was the primary hauler of anthracite mined at the Huber Colliery for more than 100 years as successor via leases with the Lehigh & Susquehanna Railroad. Anthracite coal processed at the Huber and its predecessor, the Maxwell Breaker, was hauled up the “Ashley Planes” from 1838 to 1948 when the CNJ began moving all coal over the “Back Track” around the mountains to the east, eventually reaching the same yard at Penobscot where cars had been routed from the Planes.

The track side signal sat next to the former Ashley Borough Municipal Building on North Main Street. Double tracks allowed “meets” from as one train descended the mountain into the Ashley yard while another, with pusher engines on the rear end to assist in the climb, headed east around the mountain. The slow climb meant long waits for motorists on Main Street. 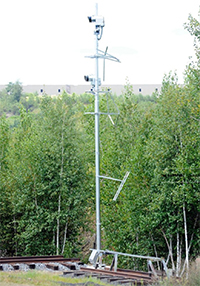 The historical marker is being installed only a few weeks after Ashley Borough moved its government offices to a new location in the former Erhlich Pest Control building in what was a portion of the CNJ Ashley yard.

Ashley donated the signal, which was hauled to the park where it was sanded and painted by volunteers headed by Don Kane of Ashley. Kane also took the lead in restoring a watchman’s shanty that now has a coal stove and other period memorabilia. Two small sections of railroad track have been installed at the shanty and signal.

Bill Best, president of the Huber Breaker Preservation Society, has advocated for recognizing the important role that railroads played in anthracite history.

Ray Clarke, chairman of the society’s board, said the Ashley Fire and Rescue Hose Company will do a flag ceremony on Monday. Marie Saltz will sing the National Anthem and Yudichak will speak prior to the unveiling.

The marker will be outside the park fence, only yards from the memorial that was dedicated three years ago.

The park sits on 3.1 acres of land donated by the Earth Conservancy, which uses the former Blue Coal Corporation building as its offices.

Kane and a crew of volunteers, including 20 Hanover Area football players, worked on the park grounds last weekend.

Clarke said the track side signal will be activated in the near future and a new spotlight will be installed to illuminate the American flag. Six street-style decorative lamps also will be installed to accentuate the memorial. Work continues on restoring two mine cars.

An Ashley woman, who requested anonymity, donated the $2,000 cost of the historical marker.

The society will also hold its annual chicken barbecue on Sunday, Sept. 10, from 12:30 to 4 p.m. at Ashley Firemen’s Park, Ashley Street. Serving will be by takeout only. For ticket information, contact Clarke at 570-824-3176.

Donations can be made to the Huber Breaker Preservation Society at Corner Post Federal Credit Union, P.O. Box 1172, Wilkes-Barre, PA 18703.

Read the story from The Citizens Voice here »