There are No Small Acts of Kindness 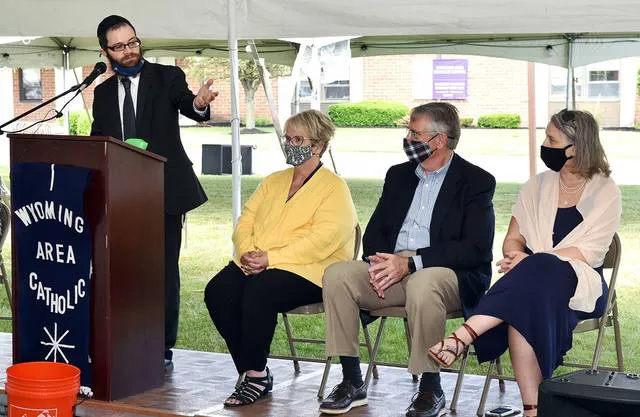 Rabbi Yossi Schulman thanks the children of Wyoming Area Catholic School for collecting $2,000 for the Commission on Economic Opportunity as part of an ARK (Acts of Random Kindness) Project. Seated from left are school principal Eileen Rishcoff, Charles Barber from the Luzerne Foundation, and Gretchen Hunt from the CEO.
Tony Callaio | For Times Leader

“Let me see what you’ve got,” Rabbi Yossi Schulman asked the student body on Thursday morning, and the 150 youngsters who attend Wyoming Area Catholic School in Exeter responded — quite loudly.

The noise came from coins the students couldn’t resist jingling in plastic banks, coins they had set aside over the past few weeks — in some cases giving up ice cream or other treats — in order to make a donation to the Commission on Economic Opportunity and the hungry children that organization helps.

“Wow! That’s inspirational,” the rabbi said, after the noise subsided, and before the school presented $2,000 to the CEO.

The kids’ banks were shaped like arks, as in Noah’s ark, but also as in the acronym ARK, which stands for Acts of Random Kindness.

Schulman, who is the president of an organization called Unite the World, had asked the Diocese of Scranton if one of its schools would participate in a pilot program involving Acts of Random Kindness and, as principal Eileen Rishcoff explained, “The diocese chose us.” 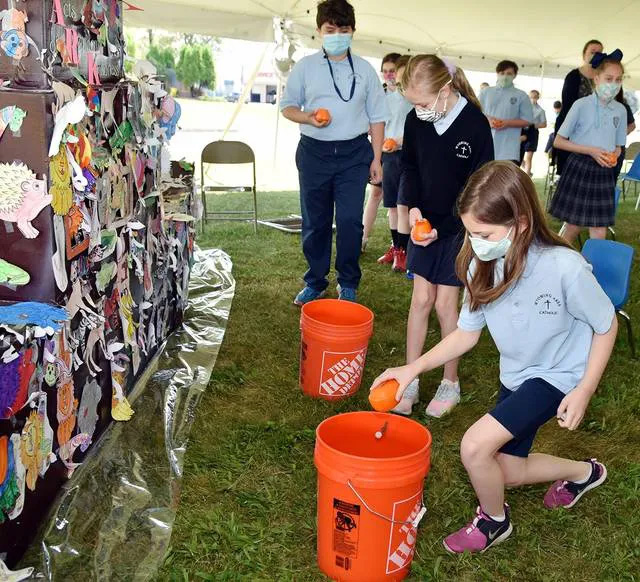 Students from Wyoming Area Catholic School empty the coins from their ark-shaped banks into collection buckets on Thursday, the day they presented a check for $2,000 to the Commission on Economic Opportunity.
Tony Callaio | For Times Leader

As a result the Commission on Economic Opportunity, which was the charity the Wyoming Area Catholic students had chosen, received $2,000 from the school on Thursday, along with the news that WAC alumni parents Peter and Patti Sidari would match the donation with an additional $2,000.

Some of the students also made it a point to offer Acts of Random Kindness as individuals.

“I would hold the door open for everyone,” said 10-year-old Cayden Richard.

“I go over to my grandmother’s house every week,” 12-year-old Isabella Falzone said. “I take her dog for a walk and help her with the spring cleaning.”

Part of the fun of the ARK project at school included a hand-crafted facsimile of an ark, constructed from boxes and covered with small pictures of giraffes, alligators, hedgehogs, zebras, deer, monkeys and other animals.

“Each animal cost $5,” Rishcoff said. “And each animal represents a different grade.”

Among the lions and elephants there was even a tauntaun, a make-believe creature from “Star Wars.” One of the teachers hinted he was responsible for attaching that to the ark.

While the ARK project had its fun elements, the money the students collected was intended for a serious cause. 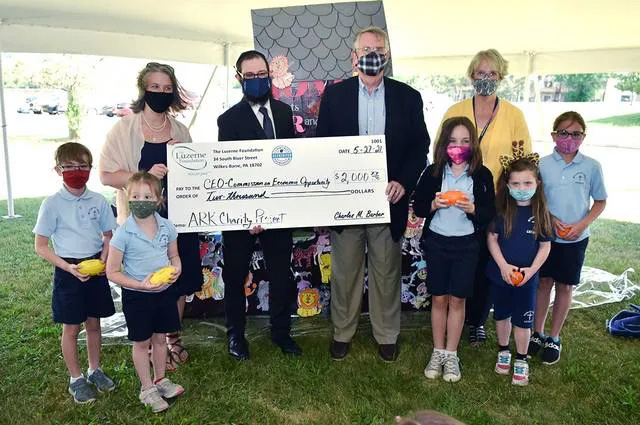 As Gretchen Hunt from the CEO explained to the students, who were gathered under a tent for an outdoor assembly, hunger is a serious problem for many children their age throughout the county.

“It’s hard to think about anything else when you’re hungry,” Hunt said. “It’s hard to listen, hard to understand, because your stomach is talking to you.”

Ten-year-old Julianna O’Hop said afterward she had given money to the ARK project instead of buying ice cream one day, and hoped that donation would help some hungry kids.