By Tony Callaio – For Times Leader 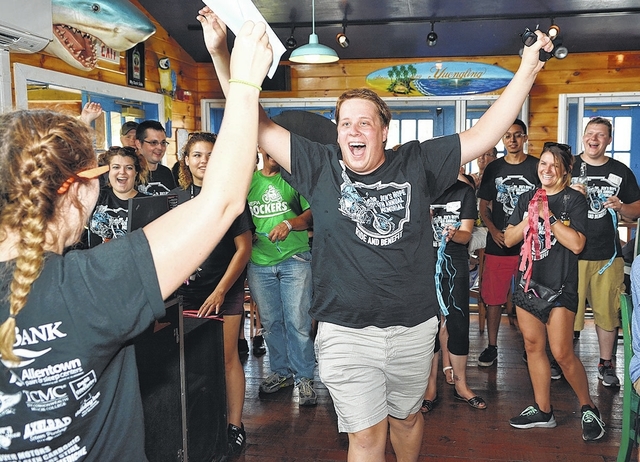 Jimmy Musto, of Jenkins Township, is thrilled to have his name picked in one of the many raffles at the Fourth Annual Dr. Jen’s Hope Motorcycle Rally and Block Party at Cooper’s Seafood House and Cabana in Pittston.

PITTSTON — All Dr. Jennifer A. Sidari dreamt about from high school through medical college was to helping people.

And even though she is no longer here to fulfill those dreams, her legacy continues to serve the community more than three years after her death.

The Fourth Annual Dr. Jen’s Hope Motorcycle Ride and Block Party was held Sunday at Cooper’s Seafood House and Cabana. It featured food, raffles, music and a dunk tank to raise money for Dr. Jen’s Hope Foundation, named in honor of Sidari who died on May 29, 2013, at the age of 27.

The Sidaris were overwhelmed and grateful with the public’s response.

“We have given out, since Jen’s death, approximately $130,000 to local charities,” Pete Sidari, Jennifer’s father, said. “We are really proud to say no administrative fees come out of it. Whatever a donor gives goes 100 percent to charity, and we are always looking out for people that need help.”

The Dr. Jen’s Foundation will announce the recipient of a full scholarship to The Commonwealth Medical College on Wednesday.

“This is one of our high points since Jen’s passed — the awarding of our first four-year scholarship to med school,” Sidari said. “Our hope is that one of these bright young doctors that receive the scholarship will practice in our area.”

The scholarship is valued at approximately $240,000.

Chris Musto, 22, of Pittston, is a first-year student at TCMC and the recipient of a partial scholarship from the foundation, totaling $12,500.

“The scholarship money takes the burden off of me trying to find a way to pay for medical school,” Musto said. “Knowing who Jen was, I’d like to carry on her legacy.”

Money raised from Dr. Jen’s Hope has helped Wyoming Area, Wyoming Area Catholic, the Child’s Advocacy Center, the Red Cross, the United Way and, in the near future, Helping Hands in Hazleton.

“One hundred percent of the money raised, stays in our area,” Sidari said.

Jennifer was a 2005 graduate of Wyoming Area and each year, the Sidari family donates to a graduating senior.

“It’s been a blessing to get to know the Sidaris,” said Rosella Fedor, Wyoming Area scholarship coordinator.

Fedor went on to say the family has shown great courage in the face of the tragedy.

Although Lamoreaux is looking toward working in a non-medical field, she has been inspired by Jennifer’s history of volunteerism. Jennifer traveled overseas to help the sick and needy in other countries.

“What she did was so inspiring that after college I want to join the Peace Corps.,” Lamoreux said. “What she did in her heart was just amazing.”