Law Firm Gives Back To Community In A Big Way 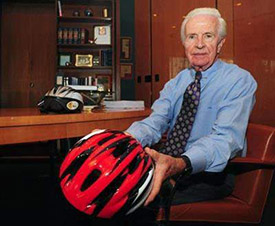 KINGSTON — Attorney Joseph Quinn, a trial lawyer who has achieved record-setting verdicts and settlements, said it’s always important for him and his law firm to give back to the community. After winning an $11 million settlement in a major malpractice case involving the death of a 4-year-old boy in 2005, Quinn and his firm started a fund to advocate for children’s safety. The fund ensures hundreds of Northeast Pennsylvania children receive free bicycle helmets each year. For the 11th year, the Hourigan, Kluger & Quinn Fund for Children’s Advocacy, also known as HKQ Kids, will distribute free bicycle helmets at the annual Fourth of July celebration at Kirby Park in Wilkes-Barre from 11 a.m. to 6 p.m. An additional helmet giveaway will be held during First Friday in Scranton on Friday from 4 to 7 p.m. at Lackawanna County Courthouse Square. Children must be 12 or under and accompanied by an adult to receive helmets. Quinn and his law firm started HKQ Kids in 2005 following the settlement of the malpractice case involving 4-year-old Torajee Bobbett. He died in 2001 due to negligent care at the former Mercy Hospital in Wilkes-Barre. “We obtained a major settlement and a very significant fee and I’ve always believed you’ve got to give back,” Quinn said. “I decided that it was time to establish this foundation and make a significant contribution so we could advocate for children’s safety and it has really taken off.” Since the helmet program started, more than 10,000 children were fitted for free bicycle helmets. HKQ has stocked more than 1,300 helmets this year to meet the expected demand. Sue Greenfield, business manager for Hourigan, Kluger & Quinn, would not say how much the firm paid for the helmets and where they get them, but she said the retail price if they were bought in the store would be $20 to $30 each. If a child’s bicycle helmet hits the ground, she said it should be replaced. She encouraged parents to get new helmets for their children at the giveaways. All helmets distributed by HKQ Kids meet U.S. Consumer Product Safety Commission standards and are equipped with a user’s manual and CPSC label of certification. Children are fitted for helmets at the giveaways and the law firm’s partners and employees make the events possible each year. Quinn said it’s a major undertaking to pack all the helmets, load them onto trailers and get them to the events. “A lot of our people give up significant time on holidays to do this,” he said. “One of the nice things is a lot of us bring children and grandchildren and it teaches them a lesson too about how fortunate they are and how important it is to give back.” The helmets are appreciated by many families who cannot afford to buy them, he said. “We take great satisfaction out of so many parents who are just so grateful to get a helping hand,” Quinn said. “What’s become so clear is there are so many families who are under so much economic stress that they can’t do what they want to do for their children.” Last year was the first year that HKQ Kids brought the helmet giveaway to Scranton and Quinn said it was an “enormous success so we’re doing it again.” “We thought we could help increase the number of children who were riding safely who had helmets in the event they fell,” Quinn said. “If you don’t have a helmet on and you fall off a bike or a skateboard, serious injury can occur.” The Luzerne Foundation, which administers the HKQ Kids fund, also advocates for children’s safety through other educational outreach programs, including those that raise public awareness about child hazards. “We’ve tried to keep the public advised about unsafe, defective products,” Quinn said. “We’ve held seminars. We’ve helped train babysitters so they not only know the importance of caring for a child but they know how to respond to some unforeseeable emergency that arises.” Hourigan, Kluger & Quinn law firm has offices in Kingston and Scranton. Contact the writer: dallabaugh@citizensvoice.com; 570-821-2115; @CVAllabaugh on Twitter