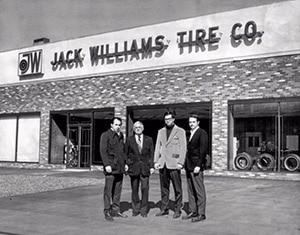 The late Jack Williams Sr. started Jack Williams Tire Co. with one location in Kingston in August 1929 with a $500 loan from his father.

His humble store consisted of one service bay, two gas islands and a small retreading plant. At that time, gas cost 21 cents a gallon.

The company has come a long way in 90 years. One shop grew to two with the addition of a shop in Berwick. The two-shop footprint grew to include a 90,000-square-foot headquarters in Moosic in 1988 and a 130,000-square-foot warehouse there that same year.

The company also operates two specialty shops under the brand Auto Addictions. It purchased Auto Addictions in 2003 to give customers more opportunities to personalize their vehicles with services like window tinting, mobile electronics, remote starters and performance accessories. 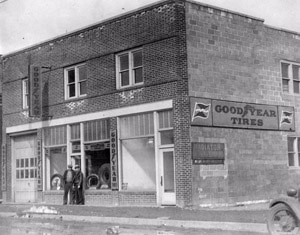 To commemorate its 90th year in business, the company will give away a 2019 upgraded Jeep Wrangler. People can enter to win at www.jackwilliams.com/90th-contest or in stores. The winner will be selected in a random drawing on Dec. 1.

The Williams family thanked employees for their hard work and dedication to help them achieve 90 years in business.

“We’ve successfully been able to reach this milestone with the help of our employees,” said Bill Williams, chairman of Jack Williams Tire, who took over the company in the 1960s. “Without their dedication and hard work, our 90th anniversary wouldn’t have been possible.”

Longtime employees include John McGroarty, manager of Jack Williams Tire in Wright Twp., who has worked for the company for 43 years, and Joseph Yedloski, inside sales associate in Moosic who is celebrating his 35th year with the company.

McGroarty started out as a general service technician and later managed the Kingston location. He has been the manager of Jack Williams Tire in Wright Twp. since it opened more than five years ago.

Yedloski started working for the company at the Kingston store in 1984.

When McGroarty and Yedloski started working for Jack Williams Tire, the company had three stores in Kingston, Berwick and Wilkes-Barre and a warehouse in Luzerne. They watched the company grow immensely over the years.

McGroarty credited employees and the Williams family’s “hands-on” approach and active involvement in the company for the success and growth of Jack Williams Tire. He said the family puts in long hours and “don’t ask you to do anything they don’t do.”

Yedloski said Bill Williams has been “really good to work for” and he also has worked with his children, who he watched grow up over the years.

Jason Williams said the family focuses on treating employees and customers well, which he calls the “Williams way.”

“It’s about being upfront and honest and going above and beyond,” he said. “It’s about doing things the way you would want them done for yourself.”

Over the last 10 years, he said Jack Williams Tire has experienced rapid growth with the opening of 22 new locations, including 12 retail stores and 10 wholesale warehouses, and the company has no plans of slowing down.

In the fall, he said the company will start constructing its 37th store in Carlisle.

Jack Williams Tire also is expanding into an additional line of business to complement its existing retail and wholesale lines of business. The company has assumed the equipment sales and service division of PetroChoice, a distributor of lubricants, oils and related products.

Company officials call the new line of business “JWT Equipment Specialists” and said the expansion will allow them to offer a full line of automotive service equipment with the expertise to sell, service, install and complete warranty work.

For people who don’t have time to come to the shop and wait to have their tires installed, Williams said technicians will come to them to install tires at home or work. He said it is more convenient for customers and helps them avoid the hassles of giving up their car or waiting for their tires to be installed.

The new service was demonstrated at a recent RailRiders game at PNC Field in Moosic and people could learn more about it online at jackmobiletire.com.

“Part of our 90-year history has been to be innovative and bring new things to the market,” Jason Williams said. “This was ingrained in Jack Williams Tire since my grandfather started it and this is a continuation of that.”