By Marcella Kester – For Times Leader

WILKES-BARRE — Standing on the stage of the F.M. Kirby Center, Luzerne Foundation President Charles Barber spoke of one of his initial interactions with Gus and Val Genetti.

Barber said he first saw the Genettis’ generosity when he relocated to the Wyoming Valley from Florida to take his position as president and CEO of the Luzerne Foundation in 2000. Having nowhere to go, Barber told 200 audience members it was Gus who offered him a room at his hotel until he found a home and relocated his family.

For their many selfless acts, the Genettis were presented with the 2018 Mary Bevevino Community Service Award during the foundation’s annual meeting and reception Thursday night.

“Val and I would like to thank the Luzerne Foundation for this great honor,” Gus Genetti said.

As he nears his 80th birthday, Gus realizes there are many things unknown about the future — however the strength of the Luzerne Foundation isn’t one of them.

“What better way to ensure the future than to make sure there are resources available to meet future needs,” he proclaimed, describing the various ways one can assist the foundation.

Another high point of the evening was the announcement of the organizations who would receive funding from the foundation.

Tara Mugford Wilson, grants committee chair, explained the annual process, which includes a request for proposals in January and a nonprofit forum in March.

The foundation received 42 grant requests. Each organization requesting money was allotted five minutes to explain who they are and how the money could aid them at the forum in March.

The organizations are grouped into one of seven fields of interest, including Arts and Culture, Education, Health and Wellness, Social Services, Youth Issues, Historic Preservation and the Environment, and Neighborhoods and Community Development.

A total of 19 grants were awarded.

Since its implementation in 1994, the Luzerne Foundation has awarded over $138 million.

Also Thursday, Barber announced plans for the Luzerne Foundation to move its headquarters to South River Street this summer.

The Times Leader Media Group was a media sponsor for the event.

Here are the nonprofits who received Luzerne Foundation grants: 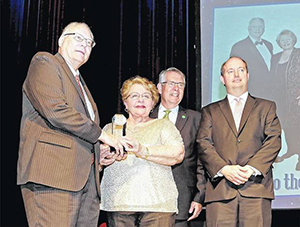 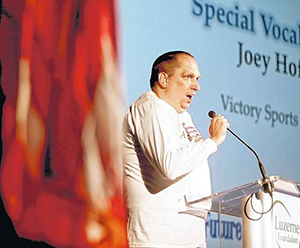 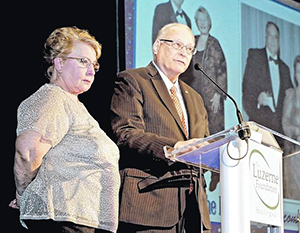 Val and Gus Genetti accept the Mary Bevevino Community Service Award during the Luzerne Foundation’s annual meeting and reception at the F.M. Kirby Center in Wilkes-Barre on Thursday. – Bill Tarutis | For Times Leader