Attorney Jerome Facher established this Fund in honor of his brother, Herbert, a graduate of E.L. Meyers High School, Wilkes-Barre. A scholarship is awarded each year to a deserving Meyers student who shows Herbert’s characteristics of outstanding contribution to school, community and family. 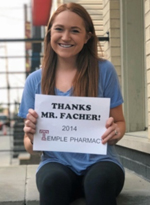 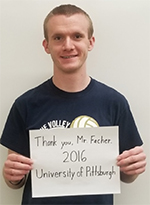 For almost 20 years, Jerome Facher has awarded one graduating student from Meyers High School a scholarship honoring his brother, Herbert Facher. The Herbert L. Facher Award has given many students the opportunity to pursue their college and or life dreams.

Herbert went into the Army shortly after graduation from Meyers, and received the Purple Heart while fighting in Germany in World War II. Later in his life, Herbert moved to Florida with his parents where he spent most of his adult life taking care of them. After their parents passed, Herbert was diagnosed with lung cancer. His treatment required the removal of half of his lung and he did well for about six years, until he got sick again. He passed away in 1995.

Jerome Facher says of his brother, “He was not the top of his class, but he had uncommon good judgement, common sense, and great wisdom.” He also said that his brother never worried about fame or fortune, but rather his impact on other people’s lives.

Jerome Facher gives the Herbert L. Facher Award to keep his brother’s spirit and unconditional love for Meyers and the community alive. When asked how he feels knowing he’s helped so many students, Facher responded by saying “it feels great” and (he) “is so pleased to help.” He said the Meyers students are always so grateful and appreciative of him.

Jerome Facher graduated from Meyers in 1943, and his brother, Herbert, in 1941. That may seem like a long time ago, but many things at Meyers have not changed. For example, when asked what he missed most about being a Meyers student, Facher said “sliding down the banister of the marble staircase,” to which I laughed, telling him that my brother and his friends, who are in eighth grade, still delight in doing the same thing today.

Facher says his favorite class and memory from Meyers was French class with Ms. Elowitz, and the teacher he says most impacted him was John “Shifty” Nagle, gym teacher and baseball coach.

Facher loved the years he spent at Meyers and it will always hold a special place in his heart. After graduating, he went on to attend Bucknell Junior College, now Wilkes University, graduated from Penn State University, and Harvard Law School (with honors).

Facher went on to become an accomplished attorney in the Boston area, working on many high profile cases — one of which was made into a movie (“A Civil Action”). This shows Meyers can and will lay the foundation for a successful future. Facher made the best out of his time at Meyers High, and he went on to do great things.

Quoting former Meyers principal, Michael Elias, ¨it’s here if you want it.” And it truly is. You can go anywhere and be anyone with a Meyers education, as long as you take advantage of all of your opportunities. Facher is living proof of this. He went on to do great things and help many people professionally, and more specifically Meyers students and the Wilkes-Barre community. Even though he has lived in Boston for most of his adult life, he always comes back and does what he can for the community, the students, and the school. He has helped many students with this scholarship, all while preserving his brother Herbert’s legacy. The Meyers community is so lucky to have someone as great as Jerome Facher, and we could not be more grateful for all he has done for us.

Lydia McFarlane is a student at Meyers High School. Student columns are published Wednesdays during the school year.

Tis’ the season of giving but it can, unfortunately, be a time for scams. Don’t be deterred by this though, as there are so many wonderful organizations to give to this holiday season. President and CEO, Dave Pedri shares how to ensure you’re making a safe contribution:✅ Give local✅ Physically go to the non-profit✅ Research their website or social media✅ When in doubt, call The Luzerne Foundation at 570-822-2065🎬Watch the Eyewitness News WBRE WYOU clip below for more information.
… See MoreSee Less

WILKES-BARRE, LUZERNE COUNTY (WBRE/WYOU) — December is often referred to as “the season of giving.” There are many charities that could use your support this holiday season, but how can…