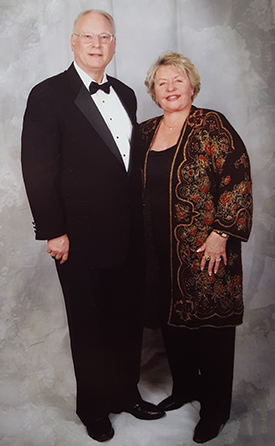 From the earliest days of their marriage, Val and Gus Genetti set aside part of their income to help the community.

They split their approximately $75-a-week earnings into separate jars: one earmarked for expenses such as groceries, one for baby-sitting services and one for charitable giving. “We have agreed on every gift since the beginning,” said Gus Genetti, president of Genetti Hospitality Group. The couple’s over 50 year’s long pattern of locally targeted philanthropy has benefitted dozens of this area’s nonprofit programs and life-enhancing projects.

Gus and Val Genetti – who are parents, hotel operators and proud Wilkes-Barre residents – are the recipients of The Luzerne Foundation’s 2018 Mary Bevevino Community Award. As the foundation’s highest tribute, the award annually spotlights people whose “unwavering dedication” has made “a significant positive impact on our community.”

A former nurse, Hazleton native Val Genetti, gravitates to health-related causes. She formerly volunteered with the Red Cross Blood Center and had been on the board of the Catholic Youth Center. She continues to serve on a committee directing funds for Women and Children’s Health Initiatives.

Gus Genetti, also born in Hazleton, repeatedly answers the call to serve. Through the years, he has accepted leadership roles with a range of organizations, including The Luzerne Foundation, the Wilkes-Barre Rotary Club, the Osterhout Free Library, the F.M. Kirby Center for the Performing Arts, the Northeast Pennsylvania Multiple Sclerosis Society, and the local council of the Boy Scouts of America.

Collectively, the duo’s generosity with its time and “treasure” has enriched lives. That was true when they donated to the area’s United Way precursor; and it remains the case with their support of Wyoming Valley newcomers such as the Volunteers In Medicine clinic and CASA of Luzerne County.

The Genettis are the parents of six; they have eight grandchildren. Val and Gus Genetti intend for their family’s philanthropic legacy to continue. They have established two funds administered by The Luzerne Foundation. They also count themselves among the estate planners who belong to the foundation’s Rusty Flack Society, ensuring their tradition of giving will go on and on.

“The giving effort has always been the same (as when we were newly married),” said Gus Genetti. “Only the amounts have changed. We’re able in the autumn of our lives to have the opportunity to give at a higher level.”

As always, however, the Genettis contribute almost exclusively to local organizations, not national ones.

Their largesse extends across the region; beyond their commitment to Wilkes-Barre, where they operate the Best Western Plus Genetti Hotel and Conference Center, they also own a hotel in Williamsport and a Scranton-area catering facility.

They evaluate nonprofit agencies’ needs and determine where their dollars can make a positive impact, Val Genetti said. They have supported the area’s colleges and universities, their church, and other local institutions they hold dear.

In short, these hospitality pros have never stopped striving to make Luzerne County an even nicer, more comfortable place to call home – for all of us.

Meet our #comunitychampion of the week: Adopt A Single Mom Project!As a single mom doing it alone, Donna lived firsthand some of the difficulties faced by many single moms with no social and financial safety net. This became Donna’s inspiration for The Adopt a Single Mom Project. The fund has provided gifts to more than 500 single moms at Christmas. The project has grown by creating programs and a social support system to provide resources to meet the challenges single moms face. The project hosts monthly Mom Night Out dinners and coordinates an annual community resource event with over 30 local businesses and agencies! For more information visit their website adoptasinglemom.org/To read more about the fund visit the Times Leader article below ⬇️ or to start your own check out www.luzfdn.org
… See MoreSee Less

The Adopt A Single Mom Project, a fund of The Luzerne Foundation was founded in November 2017 by Donna Nelson’s lived experience as a working single mom sole parenting two boys…