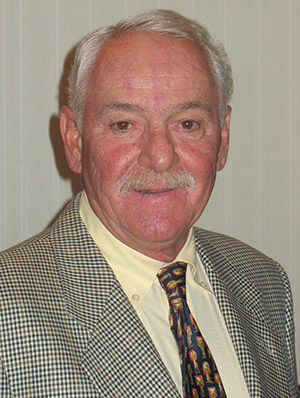 Frank Bevevino is the founding father of The Luzerne Foundation. In 1994, it was Frank who brought the idea of starting a foundation to a small group of community-minded individuals. People from business, banking, realty, manufacturing, law and accounting, and Msgr. McGowan, all heeded Frank’s call, and The Luzerne Foundation was born.

“The Luzerne Foundation exists because Frank Bevevino had the foresight and fortitude to change the ‘what if’ into ‘how can we.’ Without Frank Bevevino, there would be no Luzerne Foundation. His vision, together with his generosity, are the primary reasons for the success of this Foundation,” notes Attorney Allan M. Kluger, founding board member and recipient of the Mary Bevevino Community Service Award in 2017.

With quiet determination, Frank Bevevino championed The Foundation and what it could do for the community. He shared how the power of creating a fund in 1994 would impact the area for generations to come.

“Frank had the vision and persistence to organize a group of leaders to start The Foundation, and our community will be forever indebted to him,” states John Dowd, Chairman, Luzerne Foundation Board of Directors. “The Luzerne Foundation started out with one fund and $10,000 and now manages over $34 million and is home to over 350 funds. We can only imagine what can happen in the next twenty-five years.”

Frank’s family has followed in his footsteps. Several have served and are serving on The Foundation’s board.  In 2000, the Mary Bevevino Community Service Award was created as The Foundation’s highest tribute. This recognition reflects the unwavering dedication, commitment, and spirit of its namesake and is given to Luzerne County residents and groups who have made a significant positive impact on the community.

For everything Frank Bevevino and his family have done, and continue to do in the community, It is truly fitting that the Board of Directors has confirmed the honor of naming The Foundation’s new home The Bevevino Family Center for Charitable Giving.

“It takes a visionary to create lasting, meaningful, successful endeavors”, notes Greg Weaver, board member and Bevevino family member. “Frank’s vision and generosity have propelled The Luzerne Foundation to where it is today. Despite not being a native to our area, he was able to identify such a worthy need and garner the necessary support to carry it out. His undying commitment to our community makes him a role model to all.”

A visionary. A role-model. A mentor. A generous man. This is Frank Bevevino.